The Qhapaq Ñan (or Inca Road System, or from Quechua Main Road) was longest Pre-Colombian road system of South America. It had nearly 40,000 kilometers (25,000 miles) of roads across six countries. The construction of these roads required a long time and much effort, the quality of the roads was incredible since they are still in quite good condition after 400 years. It is still used by villages nearby it, part were built out of stone and others simply lined by small walls. The network of roads was based on two north-south roads with numerous branches. The best known portion of the road system is the Inca Trail from Cusco to Machu Picchu. Many parts of the road network was built by cultures that preceded the Inca Empire, for example the Wari Culture. In the Spanish colonial era, parts of the road system were given the status of Camino Real. And to my great joy, in 2014 the road system became a UNESCO World Heritage Site. It is not the whole road that was named under UNESCO, but parts that were either in best shape or parts that were attached to other archaeological sites. 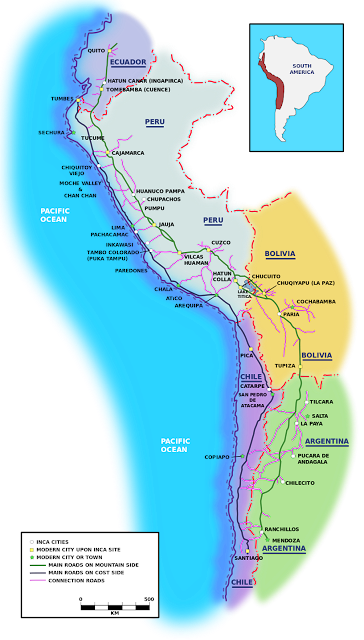 The road system was mainly used by the Incas to transport goods, information, messages and trades or even for military purposes to different parts of the empire. The two main roads are the coast road that runs parallel to the coast from Tumes, Equator all the way down to Talca, just south of Santiago in Chile. The coast road goes through Equator, Peru and Chile. The second main road (the Andes road), and longest starts in Pasto in Colombia and goes south all the way near Mendoza, Argentina. This road goes through Colombia, Equator, Peru, Bolivia and Argentina. There are also over fifty more roads either connecting the coast road to the Andes road or simply leading away in other directions. Some points of these roads go up to nearly 5,000 meters (16,000 feet) above sea level.

For more information I will refer you to the Wikipedia page and the UNESCO page.

Source for the text and map : Wikipedia