Do you know about the King's road (Chemin du Roy), road 138-E that follows the St-Lawrence River between Montreal and Quebec City. As part of my fundraising activities this summer for the Cancer Research Society, I will be walking the 280km of the road between both cities. From July 25rd to August 4th, I will be there.

You are wondering why I chose the King's Road to walk for the Cancer Research Society while I am from Abitibi-Témiscamingue.


It was important for me to make at least one activity and get my next expedition in South America be known outside of my home region of Abitibi-Témiscamingue. At the same time help out with the fundraising. 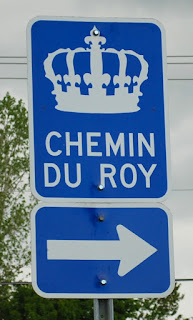 There is a symbolic behind my reasons, well at least for me there is. Just like the Qhapaq Ñan (ancient Inca road system), it is one of the oldest roads in Québec, North America for that matter. In 1737, when the construction was finished, the road was the same 280km from Quebec city to Repentigny. At that time it was the longest road North of Mexico. It represents about 1/20th of the length I will be walking in South America on the ancient Inca roads.

Now why do I start in Montréal and not Repentigny, simply because the walk will start in front of the Cancer Research Society's offices in Montréal.

I am happy to also let you know that more Quebec adventurers will be joining me to walk along the way, some only for one day and others for a few days, all depending of the free time they can allow. They will be able at the same time to promote their own adventure projects. They all have very interesting and grand adventure projects for the next few years. We will make some stops in towns along the way to chat with people while on our way towards Quebec city.

I will be there and hoping that people will come to meet me on the road to have a chat and make a few donations. I will be glad to meet you along the way.

P.S. If you know anyone along the road that could help me with food and shelter it would be awesome and greatly appreciated. Thank You.